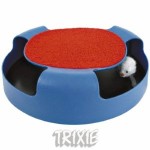 I bought one of these in advance of bringing three rescued kittens home for the first time. Once they had finished running around the house exploring, this was the first toy they played with. What actually happened was that the more adventurous kitten played vigorously for a couple of hours, patting the mouse to make it whiz around, before immediately chasing it round to catch and bat back from the other side; the other two just sat and watched (they really were not given very much choice). Although it is not the smallest of toys, one of the kittens did try to carry it around with him for a while as well.

The toy was a favourite and all of the kittens interacted with the mouse and seemed to have fun, but they stopped playing with it by the age of around nine months to a year. Whilst my older cats had a bit of play with it (once they had got over the introduction of three new kittens into the household), it never really was of huge interest and I'd suggest this is only likely to be of lasting interest for kittens.

You never know with cat toys if the cat will like it or if it will just sit there unused – but this toy was an immediate hit and continues to be so.