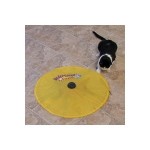 The cat loves it; he sits next to it waiting for me to turn it on. The various settings are good, with the random movements. It also stops for a few seconds, leaving the cat wondering what's happened, and then starts up again, which keeps him interested. The only downside is that once he grabs the rubbery end of the wand in his mouth, he has a tendency to pull on it, (as if he were tearing the flesh of his prey), and sometimes he pulls with such force that the wand becomes dislodged from the unit.

So you shouldn't leave the cat unattended with it, but it is fun to watch him anyway, so it's not a problem to keep having to put the wand back on. The reason I bought this is that both our cats have always enjoyed chasing a stick waggled from under the rug or cushion, just showing the tip of it, and the toy has lived up to its expectations.

We used it when we had guests and wanted to eat in peace and she could play with it for hours and always complained when we put it away. After a few months, she still loves it, but gets bored with it after a while. This is the best entertainment for both you and your cat. This cat toy won’t be ignored by your cat. I give it a five star.

One thought on “Cat Panic Mouse from the UK”